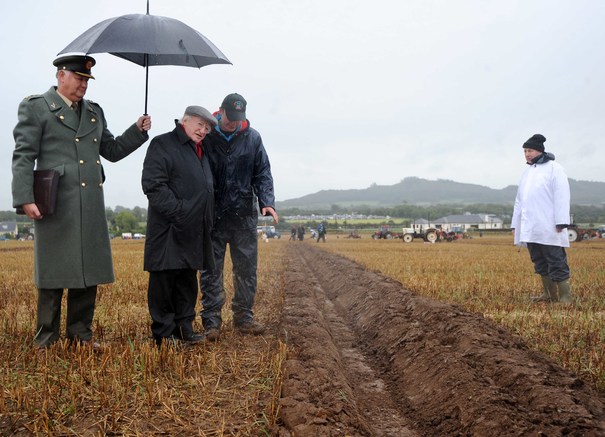 Plenty of muck at Day Two of the Ploughing

Day Two of the 2016 National Ploughing Championships saw 111,000 people head to Screggan, Tullamore, Co. Offaly. Umbrellas and raincoats became a necessity for many after 2pm when the heavens opened and it began to rain.

Speaking earlier this evening, NPA Managing Director Anna May McHugh said the showers in the afternoon failed to dampen the spirits of those who attended day two of the three day extravaganza.

“We expected large crowds again today given the positive reports and great feedback received yesterday, and even showers in the afternoon didn’t dampen the party mood and festive spirit.”

Former Kilkenny hurler Henry Shefflin spoke to Bank of Ireland at Day Two of the Ploughing and said that the atmosphere was electric at this year’s Ploughing.

“Everyone is really down here enjoying themselves, it’s a great family day out for parents and kids. People are in a good mood and are really enjoying the day.”

Looking to tomorrow and Met Eireann has said that the final day of the National Ploughing Championships is forecast to get off to a bright and cool start.

However, cloud will build up throughout the morning and heavy showers will extend eastwards in the afternoon and evening.

Temperatures are forecast to reach highs of 14 to 16 degrees, with winds set to gust at up to 20km/h.

Get the Full Story from Agriland