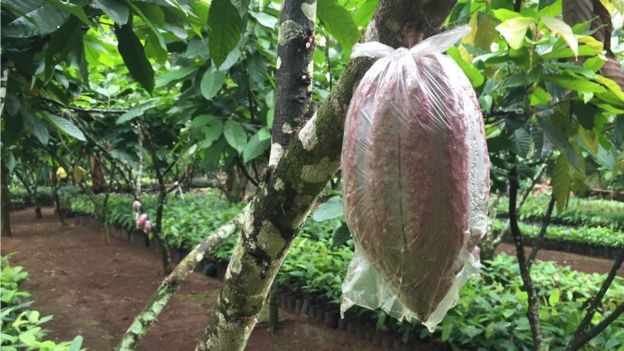 When Filipino farmer Grover Rosit first started growing cocoa trees more than a decade ago he had no idea it would allow him to retire from his day job at the age of 50.

Back then, he was working full-time as a postman earning a moderate wage as a government employee of the Philippines Postal Corporation.

His wife also earned an average income working as a teacher and he could only dream of ways to supplement the family’s earnings to one day send his six young children to university.

With a passion for plants and gardening, he used his wife’s small family plot to dabble in farming.

“During my off days and my holidays I would go to my farm and started planting cocoa little by little,” he says.

At first, it was just a trial of 50 trees but his farm quickly doubled to 100 trees.
‘There’s gold in the plants’

Today he operates the Rosit Cocoa Farms in the Baguio District of Davao City in the southern Philippines.

Mr Rosit now earns 50 times his postman’s salary and has paid for all of his children’s education.

“I know there is gold in the plants and that is cocoa,” he smiles.

“Cocoa is the only tree that allows you to send your son or daughter to college, even if you only have one hectare of land because it has a good income, a very good income.”

His original plot now has more than 3,000 trees and he has bought more farms across the Philippines on which he has planted 15,000 more. 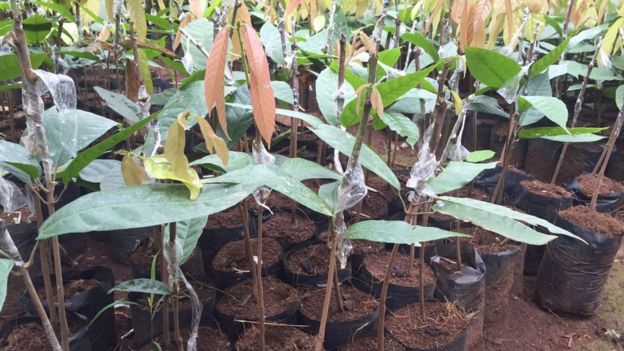 Mr Rosit has benefited from the steady growth in global demand for chocolate, which has transformed the market into an industry worth more than $80bn (£60bn) a year.

Under a national roadmap for the cocoa sector the country has set ambitious targets to increase production tenfold to 100,000 metric tons of fermented beans by 2020.

The goal is to have planted 58 million cocoa trees across the country, providing sustainable incomes for as many as 130,000 farmers.

“We really have to show the farmer the economic benefit of cocoa farming,” explains Edwin Banquiero, the National Cocoa Industry co-ordinator.

Part of the appeal of growing cocoa is that in can be planted with existing coconut farms, which has the potential to dramatically increase a farmer’s income.

Mr Banquiero helped develop the Philippines 2020 Cocoa Challenge and he believes it has wider potential not just for farmers but the entire country.

“We look at cocoa as a good crop that can help to alleviate poverty, achieve inclusive growth and ultimately achieve peace and development in the rural areas.”
Why the Philippines?

Located near the equator, the Philippines offers perfect growing conditions for cocoa farming.

Few know this more than Grover Rosit who also sells cocoa seedlings, scions, pods and seeds to other farmers hoping to cash in on rising local and international demand for chocolate.

Demand for his nursery products was so overwhelming that he could no longer hold down his job as a postman and keep up with the ever increasing list of farmers wanting to buy his trees.

While he experienced many failures along the way, he assures other farmers that the crop can provide a high yield, and relatively quickly.

“Cocoa is the only kind of tree that will bear fruit 24 months from planting. Coconuts and fruit trees take seven years to bear fruit,” he says.

Passing on the profits

Despite success stories like that of Mr Rosit, many farmers are still hesitant when it comes to abandoning their current crops in favour of cocoa.

Some fear that the current price rise on the international market doesn’t trickle down to them – which is an experience that has driven many farmers in cocoa-producing countries in Africa out of the business.

The Fairtrade Foundation has confirmed these concerns, warning that failure to give farmers a fair cut can result in poverty in agricultural communities.

That’s particularly the case if they lack resources to invest in fertilisers or replace ageing trees past their peak productivity.

The organisation therefore urges greater financial and production support to prevent these farmers from abandoning the cocoa industry for more lucrative crops such as rubber.

With global supply already under threat, it’s a warning not just to cocoa-producing countries like the Philippines, but to every chocolate lover around the world.