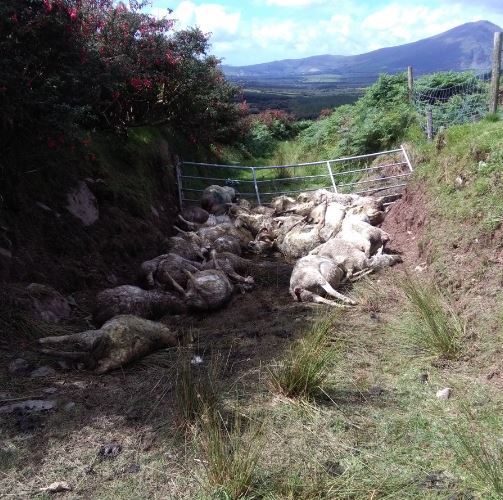 Dog owners are being warned to tie up their animals after 40 sheep were killed in attacks in west Kerry.

Pat Rohan of the Irish Creamery Milk Suppliers’ Association (ICMSA) told TheJournal.ie that one farmer had 36 of his sheep – including lambs – killed in the attack last Friday.

He said that the farmer did not want to speak to the media but was happy for this image, which was taken by his sister, to be shared.

Pat said the attack came as the lambs were set to be sold on for slaughter. “They were nearly a week away from sale,” he said, explaining that the farmer will lose money as a result. He also had to pay €300 to a local knackery to dispose of the sheep’s bodies.

The farmer said that each lamb or ewe was worth around €75 each to him.

He said that 26 lambs and 10 ewes were killed in that attack, while four other local farmers had one sheep each killed. A vet was called and confirmed that the marks on the dead sheep came from a dog.

“Some are saying a fox would have done this – a fox doesn’t hunt like this,” said Rohan. “It was a dog or a number of dogs.”

He said that the farmer would like “to put out the word would people just tie their dogs at night”.

Pat said that sheep attacks by dogs have happened in different locations around Ireland, but this is the “first time it has happened locally” on such a scale.

“Replacing these sheep can be hard because these were homegrown, born and bred on the farm,” said Rohan.

“It wouldn’t matter how big or how small [a farmer] you are, the shock of this can be quite devastating. You’d go out morning, noon and night in the spring and trying to care for your livestock. You do the best you can for them and look after them and then overnight [they are killed].”

Weekend weather: mainly dry, with sunshine on the way next week