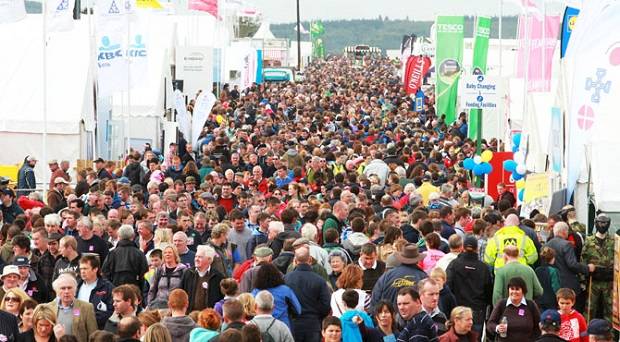 oday 111,000 visitors passed through the gates of the Championships in Screggan, Co Offaly, this brings the total attendance so far this week to an all-time high of 211,000 over the first two days. Speaking this evening, NPA Managing Director Ms Anna May McHugh said “We expected large crowds again today given the positive reports and great feedback received yesterday, and even showers in the afternoon didn’t dampen the party mood and festive spirit.”

In the afternoon, the ever popular Most Appropriately Dressed Lady & Gentleman Competitions were hotly contested in the dedicated Fashion Show Marquee. A local from Screggan Cross, Co Offaly Melissa Gately beat off stiff competition from the ladies to take the top prize and secure an exclusive break in the famous G Hotel & Spa in Galway worth €3,000. The Most Appropriately Dressed Gentleman, sponsored by Louis Copeland & Sons and Wine Port Lodge, went to John Orne from Kerry. He takes home a beautifully tailored suit by the award winning tailor and a weekend away in one of Ireland most luxurious hotels, the Wineport Lodge.

Attending today, Taoiseach Enda Kenny took the opportunity to congratulate the NPA on another successful year, he paid tribute to Ms Anna May McHugh, the NPA, staff and the several hundred volunteers needed to host the event.

With the final day of the 85th National Championships tomorrow everyone is eagerly anticipating all of tomorrow’s Ploughing action.

Full Story from The NPA