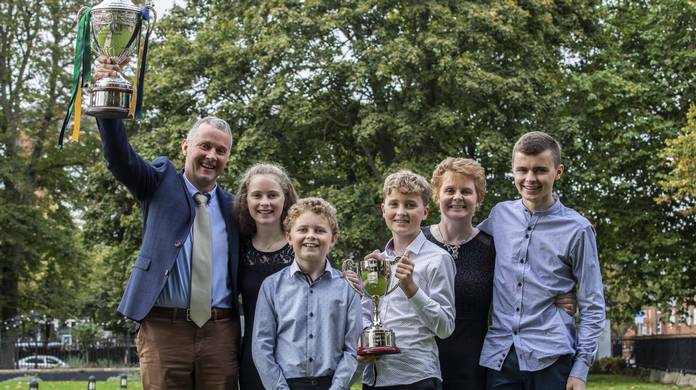 Kieran is a second-generation farmer and has been farming since 1990. The family have expanded their farm in a sustainable manner to make it more profitable and continue to produce top quality milk.

Both he and his wife Ann come from generations of farmers and have four children.

Speaking following the win Kieran said that he always wanted to be a farmer “from a very small age and enjoys working with his family”.

“It’s brilliant. You see the quality of people in the competition and know they are representing a huge group of farmers is fantastic,” said Kieran.

The awards, dubbed ‘the Oscars of the Dairy World’ celebrates excellence in Irish dairy farming and this year expanded its criteria in the area of sustainable dairy farming to champion farmers committed to caring for their environment.

John Jordan, CEO Ornua, congratulated the Hearne family on their win and said that Kevin is “a true ambassador for Irish dairy”.

“Not only is he dedicated to producing top quality milk, but he also demonstrated his commitment to sustainable dairy farming,” said Mr Jordan.

“Nature affords us with the natural advantage of our grass-based system but it’s farmers like Kevin that turn this advantage into one of Ireland’s most sought-after resources – the very best quality milk in the world.”