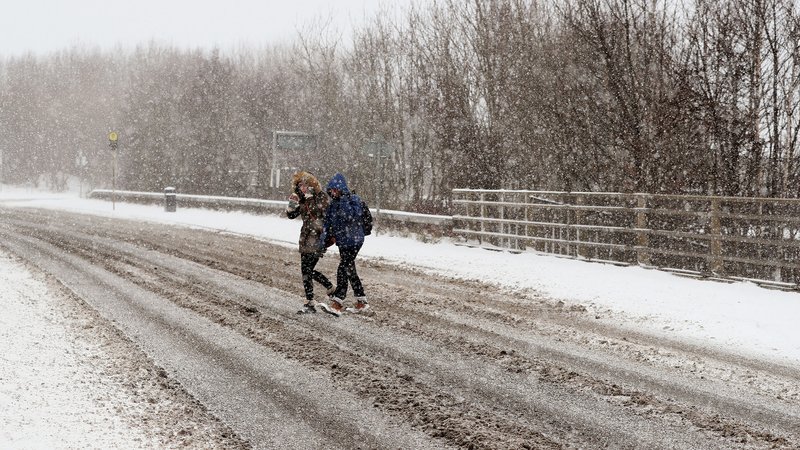 It came into effect at 11pm and remains in place until 3pm tomorrow and means that people should take action to protect themselves and their properties as the weather continues to deteriorate.

Further heavy snow showers are set to bring significant accumulations with all areas at risk.

Exceptional blizzard-like conditions and bitterly cold easterly winds of up to 100km/h will bring snow drifts northwards over the country, but eastern and southern coastal counties will be hardest hit.

Director of Communications with Transport Infrastructure Ireland Sean O’Neill said crews have been working hard to keep the roads clear, but nobody should be on the roads unless there is an emergency.

Mr O’Neill said this is extreme weather and people should heed the warnings to stay off the roads.

He said all main roads and national routes are operational, but the situation is going to “get serious” this afternoon.

Meanwhile, as people are being warned to stay indoors between 4pm today and 3pm tomorrow, a leading law expert has said if employees are unable to attend work, and the workplace is open, there are no legal rights in place to stop employers taking a day’s annual leave from their employees.

However, Professor of Law at Maynooth University Michael Doherty said that if a workplace is not open, then it is more of a grey area, adding that there should be more clarity in employment contacts to avoid confusion.

Schools, third level institutions and colleges of further education countrywide will remain closed for the rest of the week.

The polar conditions have already wreaked havoc across the State with heavy snowfall bringing public transport to a virtual standstill.

Dublin Bus and Bus Éireann have cancelled all services today.

A limited Luas service is operating on both the Green and Red Line, but services will stop completely at midday.

Flights are also expected to be severely restricted and intending passengers are advised to check their airlines operating schedules online before travelling to the airport.

Dublin Airport said the runway is opened and operations are planned, but there are cancellations.

She said even though the runway was sprayed four times overnight, it is becoming contaminated fairly quickly today.

She stressed that intending passengers should check ahead with their airline.

The Health Service Executive is also advising people with hospital or healthcare appointments to contact facilities before making unnecessary journeys.

With temperatures forecast to fall to as low as -7C, the National Emergency Coordination Group for Severe Weather is urging people to stay indoors until the status Red weather alert is withdrawn tomorrow.

Taoiseach Leo Varadkar called on people to heed public safety warnings about the blizzard conditions that are expected.

A number of passengers spent the night in Cork Airport as operations were halted due to the weather.

Managing Director of Cork Airport Neil McCarthy said beds and bedding from the airport’s fire station were used to accommodate around 300 people overnight and shops and restaurants remained open.

Temperatures in the midlands dropped to around -7C in some areas and problems were reported with almost zero visibility in high winds.

Gardaí say the motorway network is open but driving conditions are very dangerous, particularly near Portlaoise.

Motorists are urged to avoid the area of Ballinalack in Co Westmeath, on the N4 Dublin to Sligo road.

A spokesperson for An Post has said where possible and where road and transport conditions allow, post offices will open this morning. All post offices will close be closed at 1pm today and will not reopen tomorrow.

The Deputy Head of Forecasting at Met Éireann said the status red warning was extended because of the exceptionally low temperatures and wind chill effect.

Evelyn Cusack said the most severe weather will develop in south and southeast this afternoon while snow showers will be more widespread than originally thought.

The Defence Forces are on standby to deal with emergencies as and when they arise.

“During the afternoon and evening blizzard conditions will develop across Munster and Leinster as heavy snow together with driving easterly winds spread northwards to all areas through the rest of the day.

“Temps will remain below freezing for the day. Strong to gale force easterly winds will bring the risk of coastal flooding along southern and eastern coasts.