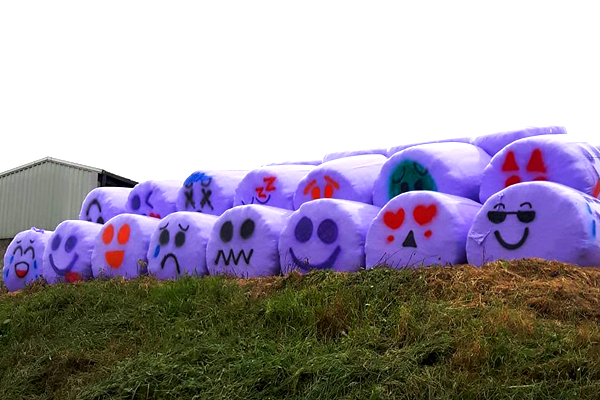 Go Purple for Crumlin with a twist in Donegal

A Donegal woman has been raising awareness for Crumlin Children’s Hospital recently, with some creative artistic flair and hay bales.

Last year, silage fields across Ireland were dotted with purple bales which resulted in €14,000 being raised to support CMRF Crumlin’s work with some of Ireland’s sickest children.

This year, CMRF Crumlin are asking farmers and contractors to support the campaign once again, by choosing to buy purple bale wrap which is supplied by Zeus Packaging and distributed through ATC Group.

Lesley Ann Cech decided to take the use of colourful balewrap one step further and has created an emoji collage on bales outside on a farm Raphoe, Co Donegal.

“My brothers bought pink wrap last year so this year we went for the purple wrap. Out of each wrap we got 30 bales and my father does 6,000 and 7,000 bales for other farmers. So we were delighted to support Crumlin Hospital.”

Aside from adding colour to the fields with the purple wrap, Lesley Ann said she wanted to take it one step further after being inspired by spray painting of sheep.

As for the inspiration on the emojis, Lesley Ann went straight to her phone. “I went on my phone keypad and got a different one for each bale. Some I’m not sure what they even mean.”

The bales are about a mile outside Raphoe, on her father Leslie Kilpatrick’s farm, where her brothers Ray and David also work.

She has designed around 25 bales with the spray painting and since last week, she says, the interest it has generated has been huge.

“There has been great interest in it and the more farmers who buy the purple wrap the better for Crumlin.” The purple bale wrap can be bought from 18 different co-ops around the country.

Go Purple for Crumlin initiative is part of a global project launched by Zeus to support children’s charities across the countries they operate in.

‘Genuine concerns about inspections must be addressed’ – IFA President