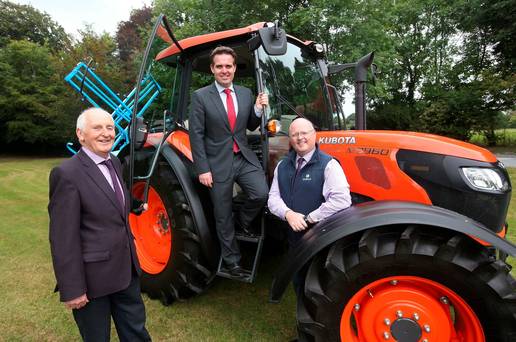 A brand new 100hp tractor and sprayer worth nearly €60,000 is up for grabs in the Farming Independent’s latest machinery giveaway. Not only have readers the chance to win a Kubota M9960 tractor, but the Irish Independent along with Zurich Insurance have teamed up to throw in a new Berthoud Alto 800 sprayer.

With new rules forcing all sprayers to have a new ‘NCT’ inspection by November, many of the estimated 40,000 farmers that own sprayers will be considering investing in a new model to ensure compliance with the new rules.

The Kubota, famed for its compactness, features a total of 12 forward and 12 reverse speeds, along with low engine noise and vibration, according to Fintan Murphy of Murphy Machinery.

The competition will run daily in the Irish Independent and weekly in the Sunday Independent from next Tuesday, August 30.

Automatic entry will also be available at the National Ploughing Championships at the Irish Independent tent, where visitors will also get the chance to see tractor and sprayer in the flesh.

Entry is unlimited so participants can enter as often as they like.